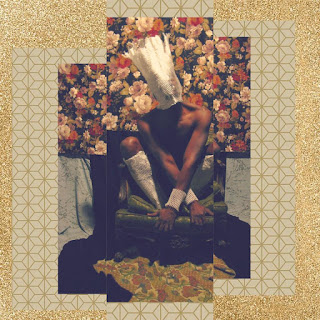 New edit of a photo that I took last winter as part of a self portrait project.

Posted by Tim McFarlane at 10:16 AM No comments:

For the past month, all I've been packing, packing, culling, packing, culling doing more packing and generally being overwhelmed with the amount of work that I have with me. That, and the fact that the new studio will be much smaller than my present one. Although I've gotten rid of some old work that I really didn't need to keep around any more, it feels like I've barely made a dent. It feels like I have way too much work with me.

I knew that this move was going to cause me to have to make some changes and adjust to a new reality and it's already happening. I'm going to have to re-evaluate my relationship to the amount of work that I make. I can't help myself most of the time, because, well, this is what I do. However,  seeing how much work I've made over the past thirteen years that I'll be moving puts things into perspective a bit. It seems like I need to slow down with the quantity of work that I make and find a way to sell more.
Posted by Tim McFarlane at 11:48 PM No comments: 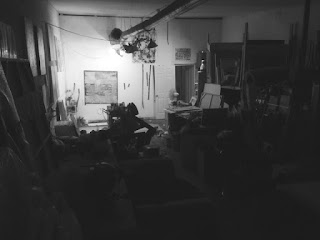 The time has come. After 13 good years here in Old City, I will be relocating my studio during the first week of August. Another entity in the building is expanding and I can't compete on price in that area, so I'm going. My landlord was nice enough to give me 8 months notice back in March (my lease officially ends at the end of December). I started looking around almost as soon as I found out. I just found a new work space yesterday. It's smaller than my present space and will require some very creative storage solutions because of the amount of work that I have with me. One upside is that my new studio will be only 2 blocks from my apartment, so that's a good thing. I've wanted to have a space really close to where I live for a while now, and thankfully my timing was really good.

So, of course there are the expected mix of emotions: some sadness for having to leave such a good space that has been instrumental in helping me make some of my best work, so far. On the other hand, this move is a chance to shake things up a bit and make room for new things to happen. I feel like I was more ready for this to happen than I previously thought. I mean, the writing was on the wall, with all of the new construction of high-end condos going on at 3rd & Market, not even a half block away, I was going to have to move sooner or later. Thankfully, several things fell into place, including my landlord's generous notice and some funds becoming available to make relocating easier than it could have been.

I'm still unsure about how I'm going to deal with the size of the space that I'm moving into, but I'm going to have to make it work. I've looked around a bit at a variety of potential studio spaces and having to re-enter the studio rental market after 13 years was a little tough in terms of how far my present budget will go. However, the convenience of being this close to home is a huge plus for me. The storage issue, however, is going to present some challenges. I'm working out something with my new landlord which is going to ease the problem, but I know that I'm gong to have to cull some much older work in order to make this new situation work without having to look at another monthly bill for storage on top of rent. I'm working on that issue and already have some potential solutions. Tomorrow, I'm going to begin the process of looking at everything that I have in the studio and determining what I want and what I should keep of the pre-2000 paintings. Then, I have to determine exactly what to do with works that are the weak links. I'm sure that I'll be destroying some things that I know I don't need to have around any more, as I have in the past. Culling artwork every so often is a good practice and it has helped me a lot in years gone by. It's time to get moving on to the next phase of my art life.
Posted by Tim McFarlane at 11:24 PM No comments: