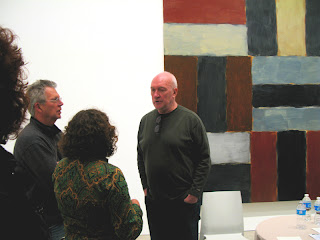 Sean Scully after the talk. 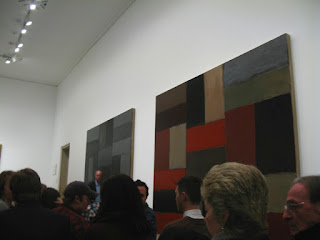 Two of the "Iona" paintings from my seat. 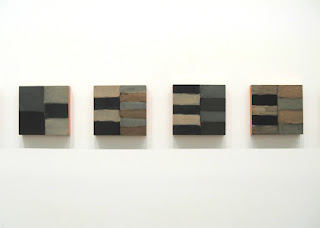 Four of the twelve "Mirror" paintings. These are oil on copper and 12 x 12 inches each. 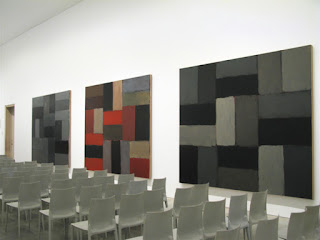 All three panels of "Iona"

Last night, I had the chance to hear and later, talk with one of my favorite contemporary painters, Sean Scully. He was at the Philadelphia Museum of Art for a talk/conversation with Michael Auping, Chief Curator at the Modern Art Museum of Fort Worth, Texas. They discussed some of Scully's background as an artist, his studio practices, and the works on display at the PMA.

Scully was straightforward about his work, life, and views and didn't mince words. It was interesting to learn that he doesn't like Barnett Newman's work, nor the "lack of variation" in Philip Guston's colors, that he uses the "same greens and reds...". He did acknowledge owning a Guston that's above his television.

In the discussion about his work with abstraction, Scully made an analogy that resonated with me. He said that (I'm paraphrasing here) "abstraction is like music without words and can be very difficult to get along with, while realism is like music with words and is very easy to digest". I can certainly vouch for the truth in the first part of that statement, considering the aesthetic and ideological challenges that I constantly find myself up against in the studio. Although, those challenges often result in hard-won rewards in the end. Combine the in-studio challenges with how difficult many viewers find abstraction, then you can have an almost perfect storm of issues to deal with. I should also add that Scully's work heavily influenced a number of paintings of mine that I did about 15 years ago. Some of those works formed the basis for my first exhibition at the Bridgette Mayer Gallery in 2002.

Later, during the question and answer session, someone asked about Scully's choice of oil paints and mediums. He said that he likes to use the best materials that he can, adding that "you get what you pay for". He noted that he had a lot of problems with some of his works from the 80's because of economics. He has had to re-paint some of the works from that period due to various issues with paint and support materials that he used during that time. He also attributed some of the problems to having hired his brother, whom Scully described as a "geezer" who could give "fuck-all", to stretch some of his paintings.

Once the Q & A was done, I took the opportunity to meet Scully personally and asked him about his fairly recent choice of using aluminum and copper as supports and how he feels about the archival possibilities of using such slick surfaces to paint on. He said that metal surfaces are ground down to create a "tooth" which helps the oil paints adhere to the surfaces. He said that he thinks that they will probably last a thousand years. He surmised that it probably won't matter, anyway because we will be heading out to the stars and won't be taking big, bulky paintings with us. Instead, he said that "we'll just have the images available in our glasses or something while the physical works will be back here on Earth". Well, Mr. Scully, the future is now.

"Notations: Sean Scully" is comprised of the three "Iona" paintings, the "Mirror" paintings, as well as two works from the "Wall of Light" series.

"Notations: Sean Scully" is on view at the Philadelphia Museum of Art until February 23, 2013

See Sean Scully's website for a more comprehensive view of the scope of his work: Sean Scully-Body of Work
Posted by Tim McFarlane at 11:59 AM

Thanks Tim. Wish I could have been there. Though the comment about Newman might have tempted me to wanna leave. ;-)

Thanks for sharing your thoughts and the images. Scully is predictably frank and the music analogy works for me as well. Truly great abstraction is more difficult to achieve for the painter and also takes requires more of the viewer.
As I'm always eager to see a major Scully exhibit, a train ride to Philadelphia is now on my calendar.

Thanks Tim. Sorry I missed you at the interview. I love Scully's work, and at the interview it was so inspiring to find a great painter who also can think and verbalize so aptly.