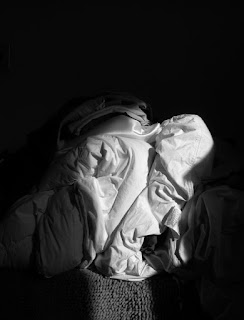 "DL (pile)", from an on-going series of light studies.

Posted by Tim McFarlane at 10:00 AM No comments: 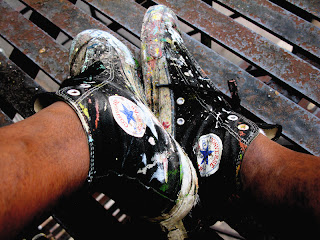 I intended to go to the studio today, but didn't. I had a pretty intense day in there yesterday and probably needed some time to let things settle a bit. It was one of those sessions where I could see the beginnings of new ideas coalescing into a possible body of work and feeling a little grounded after being in a period of extensive experimentation. Experimentation in the sense of going outside of my usual mode of working, letting things fall where they may and leaving them in that unsettled state. Leaving some works in a state of being raw and unresolved are really useful later. There was a time when I'd automatically discard such things (I still do, but I give it more thought these days) and begin anew.

This year, something has changed in how I look at and relate to new works. I've made more of an effort to not throw the baby out with the bath water, so to speak. I'm much more liable to let certain marks or passages in working paintings that I'm unsure of remain visible longer and give them more thought than in the past. Over the past few years, I had begun to be much more mercenary about what I thought wouldn't work for a particular piece and either remove the offending mark(s) right away or just do away with the work altogether. I've learned that when I have a day like yesterday, where I had a feeling for what I wanted and it wasn't turning out, that it might be better to not dive right back in the next day; that it may be better to take that next day, do something else and return the day after with fresher eyes.  I'm at my most critical and less patient with my work and progress when I'm feeling less than optimal mentally because of lack of sleep, as I was today. It's days like this that it's better for me to take care of errands or chores at home and go in tomorrow with a fresher eye, hopefully.