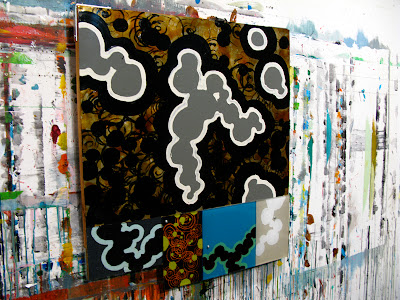 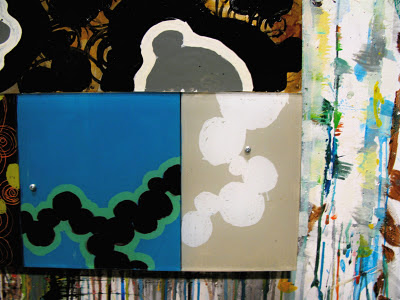 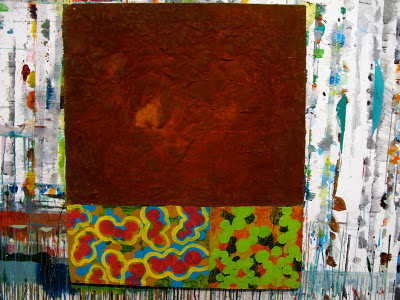 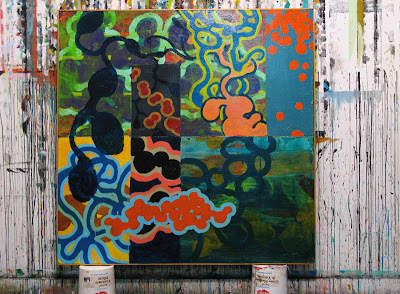 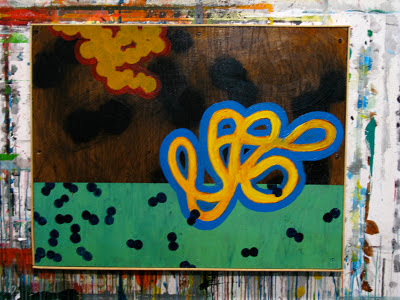 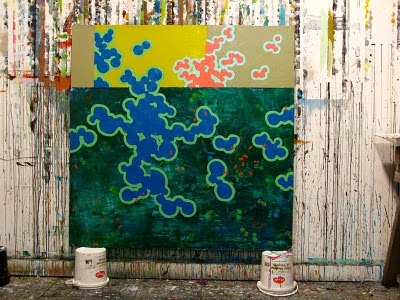 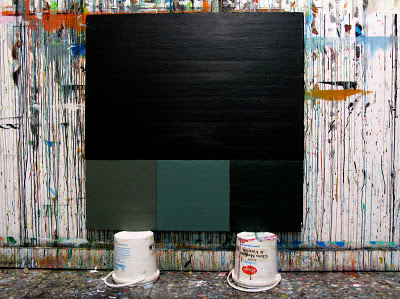 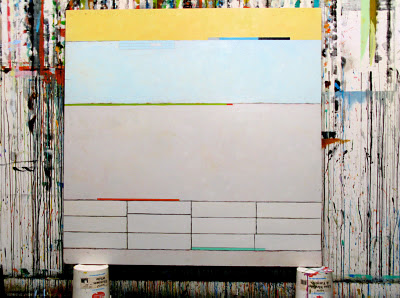 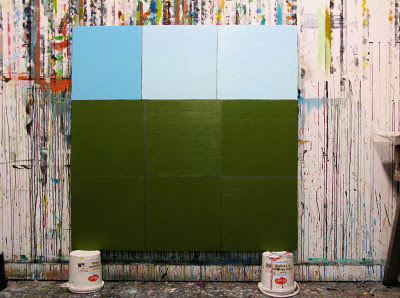 I have been reorganizing my work space in fits and starts over the several months. A couple of weeks ago, while preparing for open studios (POST), I thought that it was time that I finally dealt with my storage rack. It's a very basic structure with and upper and lower level and no compartments, just open space to keep some works in a contained space. The main reason for the reorganization was to have a better sense of where certain works were in order to avoid having to guess where something is.

Before changing things, the lower level of the rack held older, heavier works from the mid to late 90's that I brought with me to my present studio in 2002. I wanted to make that space available for newer works only and had to relocate the older ones. I had not looked a any of these pieces in years and also realized that almost none have been documented. I thought that it would be interesting to take some shots of some of them as I was moving things around.

The works pictured above all date from around 1996-2001. The first two pieces are good representations of the mixed media approach I was involved in during the latter 90's. I was very interested in moving away from canvas for painting and used aluminum, plexiglas, hardware, enamel and acrylic paints, shellac, and even a solution I bought to create rust effects on various surfaces (see 1-3, above).

The studio I had then was located in a huge warehouse on 12th Street, just north of Vine (the Goldtex Building) on the northern edge of Chinatown. During the time I had a studio there, the building housed a couple of huge clothing sweatshops, along with photography studios, fashion designers and other artist spaces. At one time, it housed the graduate art studios of the Pennsylvania Academy of Fine Arts. While I was doing the mixed media paintings, someone rented the studio next to mine around '98-'99 to film a scene or two for an independent sci-fi flick (I have since forgotten the name of said film). When the filming ended, there was a ton of plywood left behind which I had access to and made use of for paintings.

Photos 4, 5, 6, 8, and 9 all show paintings made with that salvaged plywood. Photo 4, "The Carrot's Dream Wanders" (approx. 48"x 48"), is probably the heaviest painting I've ever done. I don't know its exact weight but, needless to say, I wanted to make sure that it wouldn't warp nor come apart, as it is comprised of two panels. It has held up very well over time, so I feel vindicated for my overzealousness with cradling the panels.

It's really interesting to look back at older work and be instantly transported back to moments where certain choices were made in regards to the building of the images. Some works are more explicit than others in how I recall what I did. In some pieces, like #8, I don't recall much about the making of, whereas with others I remember a lot about the process, but when I look at it now, it's hard to say how  I even pulled any of it off.

Posted by Tim McFarlane at 2:26 PM No comments: 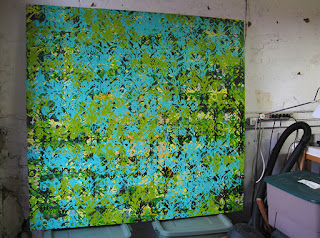 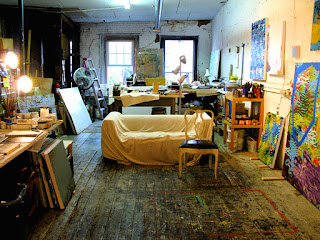 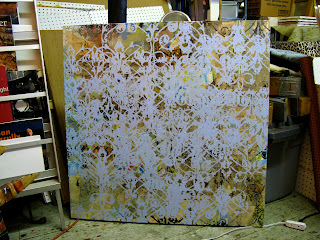 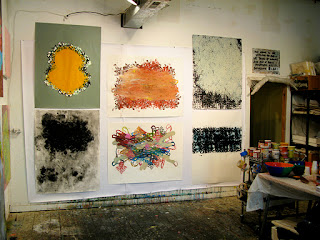 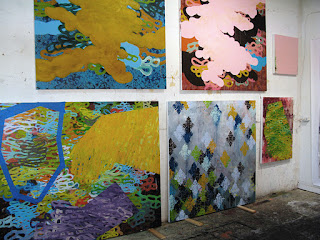 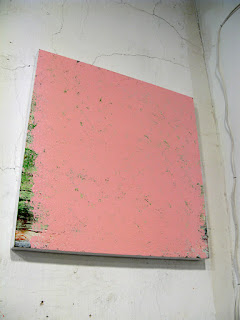 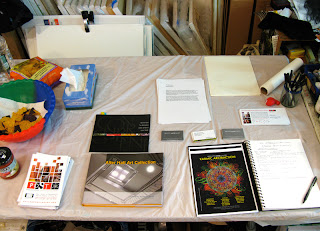 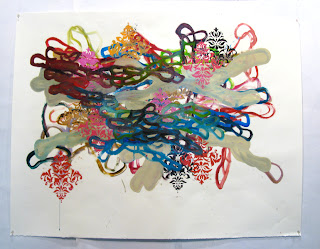 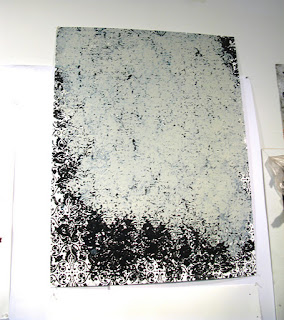 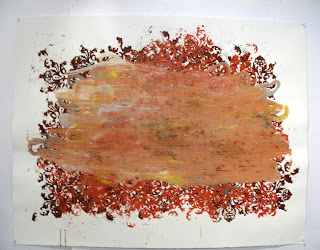 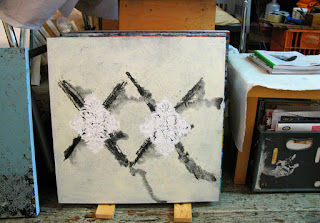 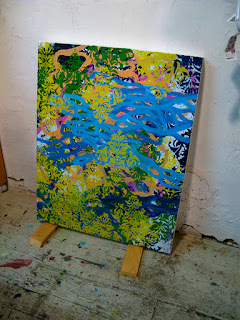 A look around the studio as it was set up for the Philadelphia Open Studio Tours.

It was a great couple of days with lots of great conversations, new faces and some that I hadn't seen in a while. The great weather brought out a lot of visitors and the new work generated some good dialogue and feedback. Thanks to those who were able to make it out and thanks to the organizers of the Philadelphia Open Studio Tours for helping to make it happen!
Posted by Tim McFarlane at 11:19 AM 3 comments: 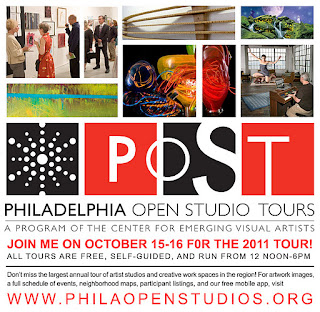 Oops! This post has been a 'draft' all week, which has been a very busy one, so please forgive the late announcement Anyway, if you are in the Old City section of Philadelphia this Saturday and/or Sunday, October 15th and 16th, feel free to stop by my studio. I will have it open as part of the Philadelphia Open Studio Tours. I will have a selection of new and recent paintings and works on paper on display.

Here's what you need to know:

While you're in the area, make sure to visit some of the other Old Ctiy POST participants, as well:

Posted by Tim McFarlane at 9:24 AM No comments: