Back at the beginning of October, I had the chance to visit a few artists' studios that were a part of the Philadelphia Open Studio Tours (POST). Most years, I don't have the chance because of work, but this year the stars aligned just so and I spent a Saturday afternoon seeing art out in West Philly.

My first stop was the studio of Tremain Smith, out on 59th Street. Tremain is a painter whose primary medium is encaustics. I've known Tremaine for a number of years and this was the first time that I got to see her work space. The great thing about it is that Tremaine's studio occupies an entire two-story house. Every nook and cranny has the touch and residue of a creative life in it. 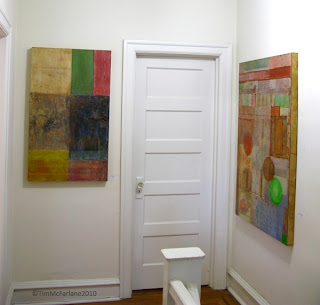 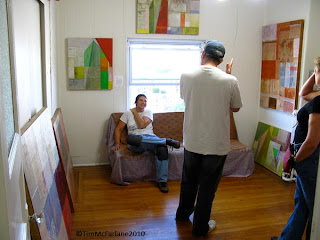 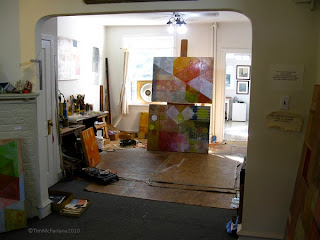 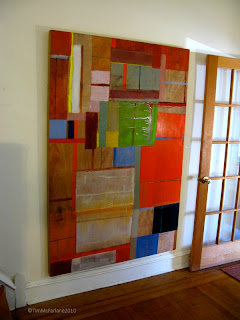 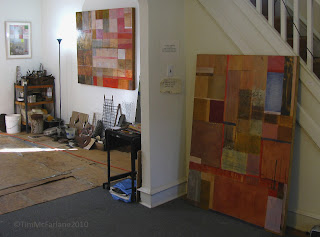 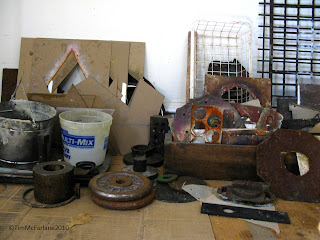 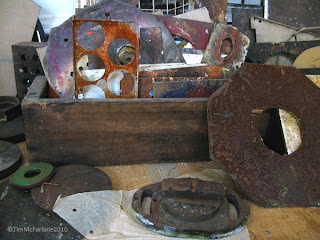 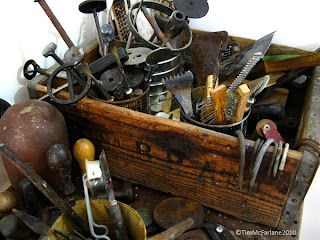 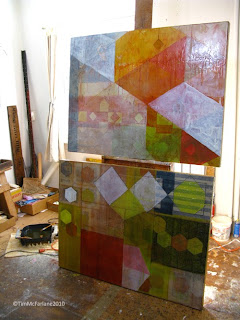 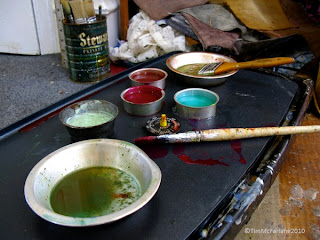 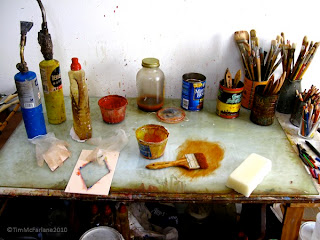 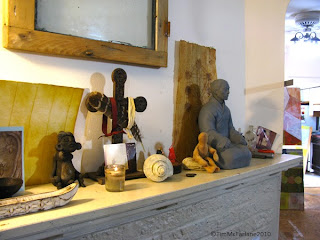 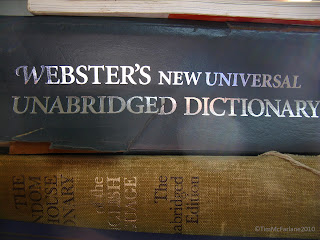 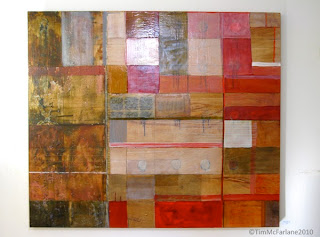 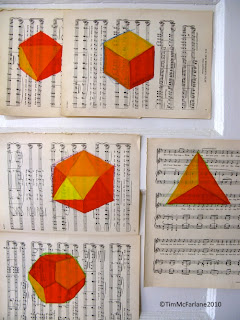 Posted by Tim McFarlane at 11:07 PM No comments:

From here to there 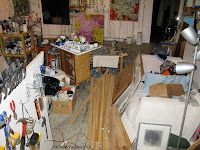 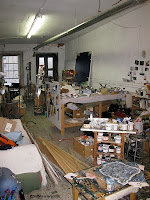 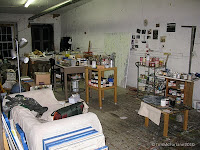 How did I spend my Friday, you ask? Why, I moved something, thought for a while, and moved something else until I got tired and had no choice but to go home for the night. The idea was to free up some wall space to do more work. It took a lot of mental, and later, physical, gymnastics to figure out where to move what, but by the time I left, the new configuration was taking shape.
It took a bit to get past the mental part of changing a long-time studio set-up, but it's something that I should have done a long time ago, at least three years or so. Moving things around also made me realize how much I can probably let go of. A bit of purging is in order. There are  things hanging around the studio that I thought I'd be using "one day" but that day has not come, so it's time to let stuff go again.
It's amazing how much mental space things take up in your head, even when they are small and seemingly insignificant. The moment I've chosen to let them go, I feel lighter and the space they occupy seems so much larger than it really is. Just like at home, the accumulation of things in the studio can be more paralyzing than we realize sometimes.
Posted by Tim McFarlane at 1:45 AM 3 comments:


Live version of Neil Young's "Walt With Me"

I've been listening to Neil Young's new album, "Le Noise" at least once every time I've been in the studio over the past week or so. It's just Neil Young, guitar and some nice producing work by Daniel Lanois. It's a really powerful, revealing, sonic blast.

I've liked some of Young's music in the past-mostly what I heard on the radio-and while I have only been a passive fan, at best, the stripped-down force of Young's voice and guitar on "Le Noise" really resonates with me.

Work is coming along pretty well in the studio. I'm having some great adventures with new works on paper. I'm in love with the 38" x 50" Stonehenge paper. It seems to be a perfect size for what I'm doing at the moment. There's also some interesting cross-pollination going on between the paper work and the paintings. I'm moving into hunkering-down mode for the winter in the studio. I hope that this productive ferver lasts for the season.
Posted by Tim McFarlane at 11:54 PM No comments: 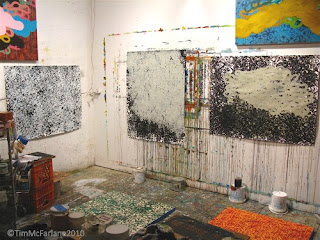 There are no others, There is only us


A short film about the power of crowds by Marc Silver
Posted by Tim McFarlane at 12:31 AM 1 comment: 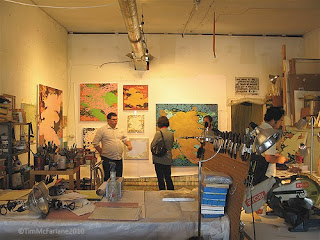 The open studio event this weekend was a success. Over the two days I had 69 visitors, most of them new to my studio. I even met a couple of people who have been following this blog, as well as a couple of others I've previously known only as Facebook connections. It's always good meeting the people behind the images and words on the screen.


I have to say, this year was probably the first where I did not have the "post-POST" blues. Most other years, after putting so much energy into working towards thsoe two days and suddenly, all of that energy that the space had from people coming in and looking around would be gone. I've usually experienced some kind of come-down, but not this year. I was glad that POST was done and was ready to get back to work. I actually got the studio pretty much back to working condition Sunday night in under an hour. I was back in there yesterday to take the paintings down from the walls and was back to work today.
Posted by Tim McFarlane at 11:51 PM 1 comment:

Today was the first day of open studios this year and it went really well. I had about 31 visitors for the 6 hours and a lot of them were new to my studio. There was a lot of good feedback about the new work (everything I have out was completed in the last 8 months, with the exception of a couple of small paintings). The weather was great outside...sunny, warm but with a little breeze, the perfect fall day that anyone taking part in POST will like. The only problem with this time of year is that there are always a ton of other events taking place around the same time, so you can never count on always having a constant number of studio visitors each year.

I arrived at about 11:20am, enough time to get my posters, balloons and other promotional items up on the front door downstairs. No matter how much I"ve gotten done in the space, I never feel comfortable until I have my promotional stuff up and visible for passers-by.

Tomorrow will be great because I won't have to worry about any last-minute things that I might have to take care of. I can sleep in and even take my time getting there.
Posted by Tim McFarlane at 11:59 PM 1 comment: 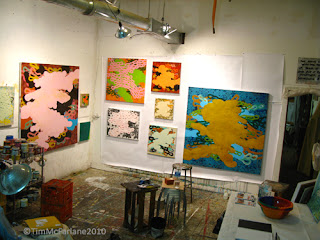 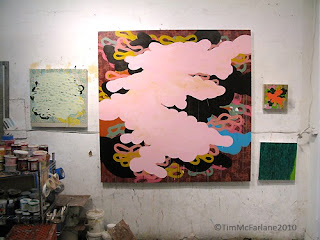 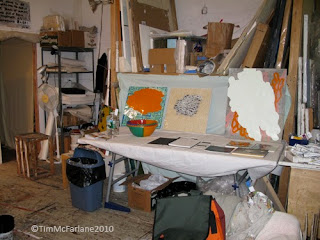 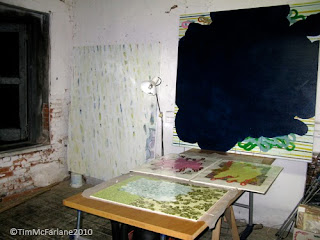 All set up for open studios this weekend. I'm pretty tired and still have a little to do in the morning but at least the big part is done with. I was good this year with getting a lot more done ahead of time than in the past. Being ahead of the curve has made the prep period a lot easier. It was also nice to have time to finish a couple of paintings before the weekend.

There's more that I want to do in terms of new work, but it will have to wait until after the weekend is over.

Once again, if you're in the Old City section of Philly this weekend and want to stop by, my studio is at 16-A North 3rd Street, 4th Floor.
Posted by Tim McFarlane at 12:31 AM No comments:

If you are in Philadelphia this weekend, Saturday, October 9th and Sunday, October 10th, you are invited to visit my studio as part of the Philadelphia Open Studio Tours. I will have some new and recent paintings and works on paper on display.

While you're in the Old City area, stop by and visit some of the other participating artists and POST partners:

Posted by Tim McFarlane at 9:53 AM No comments:

How ink is made

This is a surprisingly interesting video about how ink is made. The beautiful soundtrack is part of the attraction, but the main thing for me is just watching the colors being mixed. One of my favorite parts about the painting process is mixing colors. I especially enjoy seeing the variations in tones in the phase before the final color is arrived at. I really enjoyed working inks when I took printmaking courses back in school. There's a delicious pleasure derived from taking relatively stiff (depending on the density of the pigment and vehicle) inks from the can and making them become softer and more pliable with a painting knife or scraper.
Posted by Tim McFarlane at 11:38 AM No comments:

Labels: how ink is made, video

Laurie Anderson is one of those people I get an art-boner for (for want of a better phrase). I always look forward to seeing/hearing what she's doing next, whether it's good or "meh". Anderson is but one of my examples, but who does it for you? Whose work might inspire old creative lust for their work? Who makes you want to drop all plans for the next month or year just so you can be in the studio trying to be a better artist? This extends to people and work outside of what your personal primary artistic concerns are, so have at it...who gets your creative fires going?
Posted by Tim McFarlane at 12:31 AM 1 comment: