Designer and illustrator, Laura Oster, has been kind enough to mention my work on her blog after seeing my exhibition at the Philadelphia International Airport. Check out her work at Laura Oster Designs.
Posted by Tim McFarlane at 8:43 PM No comments: 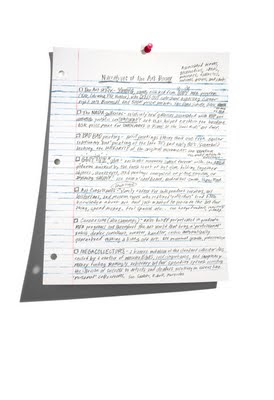 Post Opening Malaise by William Powhida
Some funny and interesting observations. Click image to read.
Posted by Tim McFarlane at 11:34 PM No comments:

Inside the Painter's Studio 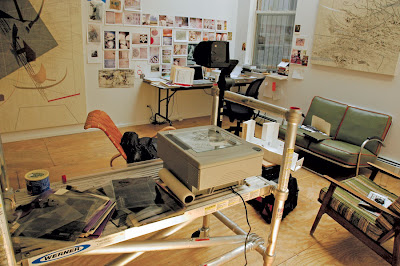 "I clean the studio every week. And a lot of times I think while I am cleaning. Usually at the end of each day, I clean up a little. I also clean up and organize at the start of each day—like nesting. It gets me into the work, kind of like pacing.”
Julie Mehretu, Harlem, New York City
(photo by Joe Fig)
In his new book, Inside the Painter’s Studio, artist Joe Fig documents the day-to-day lives of 24 contemporary artists with photos of their studios, notes on their work habits, and interviews about where and how they make art. In addition, Fig’s own sculptures are shown—miniature reproductions of the artists themselves in the process of creating, a spellbinding sort of diorama as portraiture. For any artist, historian, or art fan, there’s fascinating stuff in the minutia about gear and paint brands, and also the larger questions about what it takes to get up every morning and go paint. As Chuck Close says, “Inspiration is for amateurs, the rest of us just show up and get to work.”
Posted by Tim McFarlane at 10:44 PM 3 comments:

The arts and "Plan C"

Below is a good chunk of Wednesday's blog post by Gary Steuer, the Chief Cultural Officer for the City of Philadelphia. In it, Steuer lays out what may lie on the horizon if the budget impasse in Harrisburg is not resolved in a timely manner.
......
The State House is scheduled to act this Thursday on the bill that would allow the City to close a $700 million gap in its five year budget. Without this action the City will be forced to implement the "Plan C" budget which would be crippling to the City on many fronts, and would effectively eliminate all City cultural programs.

For those that have not been following this saga closely, the budget approved by the City Council and the Mayor required action from Harrisburg on two items - authority to raise the local sales tax by 1%, and some changes in the City's pension plan. The House eventually passed a bill - 1828 - that gave the City what it needed. The Senate then considered the bill and passed it with an array of amendments designed to rein in pension expenses throughout the state. That bill is what is now going back to the House. If the House passes it without amendment it will be signed by the Governor and the City's budget will be balanced. If the House passes a budget with further changes that the Senate does not agree to, the City will be forced to begin the process of implementing Plan C.

In the Arts, Culture and Creative Economy area, this means that notifications will begin going out to the field late tomorrow, providing details on what programs and services will be lost. Much has been written about all the horrible cuts included in Plan C - closure of all branch libraries, closure of recreation centers, 50% reduction in trash pickup, suspension of most programs and operations of Fairmount Park, police officer and fire fighter layoffs. But there has been relatively little coverage of the arts cuts included in Plan C. Here is a summary of what will be eliminated:

In related areas, the cuts to Commerce will include virtual elimination of the Art Commission and the Historical Commission. Other cultural programs and support that take place through Recreation, Records, City Representative and other departments are also largely eliminated. In terms of timing, staff will be notified if they are being laid off on September 18th, and all cuts and layoffs will become effective as of close of business on October 2nd. This is also when all program eliminations will take effect. If the House and Senate agree prior to September 18th, the notices will never go out, and in fact if there is agreement anytime up until October 2nd, we can pull back from the precipice. After that point, while programs and staffing can still be restored it gets much more complicated. Some staff may take retirement and not be able to or interested in returning to work; they may also find employment elsewhere. It will be complicated in many cases to restart programs, reopen facilities, etc.

There is hope that with pressure from their constituents, state legislators from both legislative bodies and both sides of the aisle will find a compromise before this comes to pass. It goes without saying these cuts will be crippling to the City and a significant blow to its citizens.
(Source)
Posted by Tim McFarlane at 6:30 PM No comments:

"The process by which an artist’s work finds its way into a commercial gallery is often long and circumvented. Stein was gracious, politely tenacious, and smart. Professional relationships can often be analogous to marriage, and after three years of “dating,” I was certain that I liked Stein as a person. This was someone with whom I would enjoy working on a day-to-day basis; someone whom I could trust; and someone who clearly has a bright future, so that after one successful show I will not be left in the lurch with no further compelling work to promote."-Brian Paul Clamp, director,ClampArt (New York City)

The above quote is from this article on the F Stop photography website.

Articles like this should be required reading for anyone looking for gallery representation, from the newly minted BFA or MFA to even older, more experienced artists. Even though this article comes from the viewpoint of a commercial gallery that specializes in photography, the lessons are general enough to cover any kind of artist seeking professional representation.

I can relate to this because it parallels the way I wound up being represented by the gallery I work with, the Bridgette Mayer Gallery here in Philadelphia. When she opened her gallery here around 2001, I was already looking at a couple of other galleries in the city for representation. I made it a point to go to the openings of shows she had as well as checking out the work at other times, as I was genuinely interested in some of the artists she was showing. I introduced myself and got myself onto her mailing list. At the same time, my work was gaining some attention after it was included in a prestigious regional exhibition grant competition and other local exhibitions.

The 'dance' began in earnest when Bridgette asked me to bring some slides and other materials to the gallery for review. About three or four months went by and then she scheduled a studio visit for another three months down the line. In the meantime, we stayed in touch and I kept working as usual.

In the spring of 2002, she came to my studio. She was really interested in my work as I was her gallery, and I remembered that we had a long conversation that afternoon. I was in a transitional period with my work, changing how I painted and was moving towards a more hard-edged, geometric abstraction from work that was more based on biological forms. She had a lot of questions about what I was doing and how I saw the work developing, etc...

At the end of that conversation, she offered to represent me. I took some time to look think about it, asked her some questions and after a couple of weeks, I signed on with her. The relationship we've built over the intervening 7 years has grown to one where there is friendship, mutual respect and benefits on both sides. As with any other relationship, it's constantly evolving and, so far, things are going along well, even with the economic crap storm that's been happening. It's good to know that there's someone standing behind my work in the good and bad times.

Posted by Tim McFarlane at 10:12 AM No comments:

Rebecca Crowell, an artist I know only through the web, has included a couple of shots of my project, 'This Moment', in a slide presentation that she has used for workshops this past summer. Other artists that I've connected with online included here are Diane McGregor, Ian MacCleod, Jen Bradford, Lisa Pressman, and Michael Kessler.
Posted by Tim McFarlane at 12:34 PM 2 comments: