Spent some time at the gallery yesterday tweaking the layout for the show. It's always tough making choices about what should stay up and what needs to sit on the sidelines, but out of those tough choices often come good results. I think what we came up with works.
Here's info about the show:
Tim McFarlane

This Moment (vault room)
A temporary, site-specific work that will be done in the vault room project space during the course of the exhibition.


Jen11 from UPPERCASE gallery on Vimeo.
Jen Bradford, an online artist friend, is included in the traveling exhibition, Jen 11.

Posted by Tim McFarlane at 10:30 PM No comments:

I don't think I've mentioned it here, but there has been a running drama with my computer over the past few weeks that has been maddening. Back in February, my hard drive crashed and had it replaced. Now, I had a new hard drive with twice the memory than the previous one for a nice price. About a week into using the new drive, it also crashes. This time, I'd saved important stuff to my external drive. This time around, the drive had to be replaced along with the power and data cables. Luckily, the labor was under warranty and all I had to pay for were the cables.

So, I'm up and running again, keeping cautiously optimistic that this time things will keep working like they should.
......

For all intents and purposes, I'm finished with the work for the show. I've been in a whirlwind of finishing pieces and documentation, which is happening this week (Thanks, Mark!). I've also spent a considerable amount of time coming up with titles for the new works. Sometimes, giving a title to a piece comes easily-I'll look at it and something pops up and that's it. At other times, I'm left looking at a painting with the blankest of stares. When it finally happens and seems like a good fit, the work takes on an even greater significance for me.

Although I'm done with the work for Right Now doesn't mean that I stop working, quite the contrary, actually. I'm still in a forward-moving space and have a few projects I want to concentrate on now. This is pretty unusual because with past shows once I've gotten to a point where I feel that the paintings are done, I usually need to take a break from the studio for a bit. Not so much this time around. I'm not going to question it. I'm just going to keep going and ride it out.
Posted by Tim McFarlane at 10:18 AM No comments:

I stopped by SAGE Projects shortly after it opened on Wednesday to see what happened when a group of artist friends took over a former retail space on South Street. 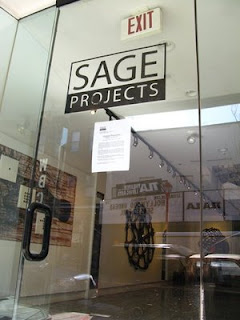 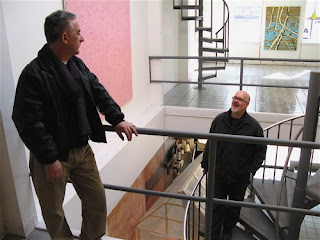 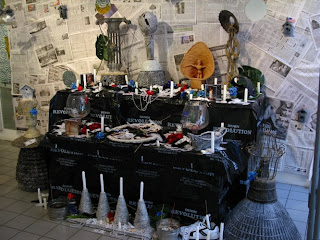 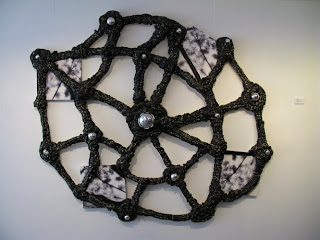 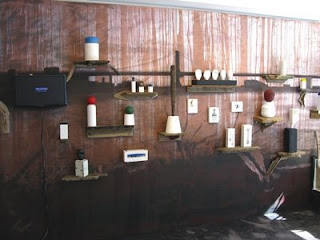 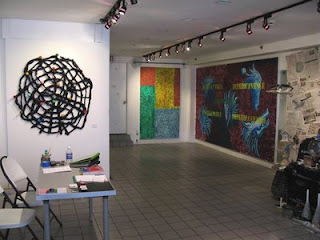 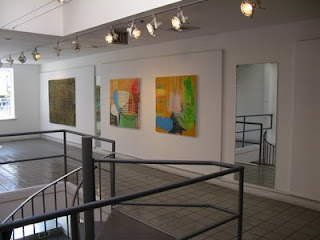 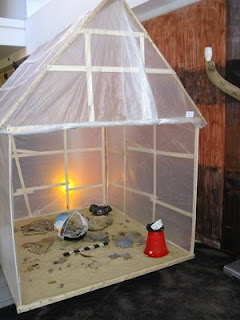 Excavation Tent by Vincent Romaniello
I also managed to get to Fleisher Art Memorial to catch the latest Fleisher Challenge show. I only got shots of one of the artists exhibited, Mark Khaisman who uses common packing tape to make his images. More about Khaisman at Mark Khaisman Studio.com 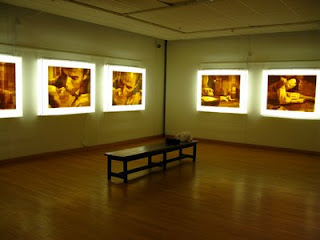 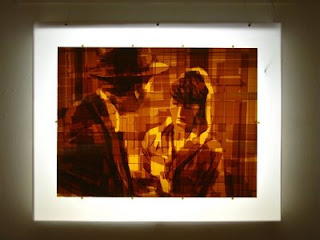 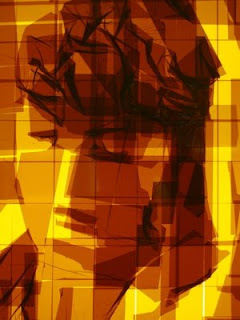 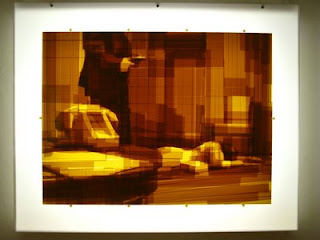 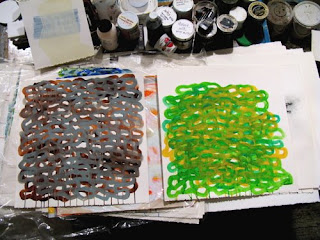 Two new paintings on paper from the Phenomena series.

Three weeks to go before I have to deliver the new works to the gallery for the show. Last week, I had a good studio visit with Bridgette where we talked about some of the recent works that will be in the exhibition as well as the vault room project.

The title of the exhibition will be Right Now/This Moment and will have two components. In the gallery, I'll be showing new and recent paintings and works on paper and in the vault room, I'll be interacting with the space with temporary drawings and possibly other media. I'm leaving the second aspect open to a more spontaneous interaction with the space.

The scale of most of the works will be smaller than in the past, with the largest paintings on canvas and panels being 36" x 36". Thankfully, I always work in a variety of sizes and going with mostly small paintings right now seems like a good thing to do considering the economic crapstorm we're in. However, I have been working on some larger paintings on paper that measure 50" x 50". Having done the works on paper for the airport, I've gained a liking for using thinned-down acrylic paint on paper. The paper accepts the paint in a way that canvas and wood panels don't and I love the results.

We also talked a little about the vault room project. The vault room is a smallish space in the rear of the Bridgette Mayer Gallery that's used as a project space of sorts. I believe that the space where the gallery is located was used as a jewelry business years ago, but I'm not sure. It's possible that the vault space was used to store jewelry or other valuables. As an exhibition space, the vault room is somewhat difficult, but it has been used to great effect in the past by other artists. One notable installation was done by Susan Brandt (scroll down), who piled various types of fibers along the rear wall.

At this point, I'm going to be doing temporary drawings and whatever else I decide to do during the exhibition. This part of the show is going to be a 'spontaneous interaction' where the objective is to make use of a space that I'm not used to working in. There is no plan for what I'm going to do from day to day, but something will change in there every time I'm present.

Even though I'm just about done with works for the show, I'm going to continue working just as hard over the next couple of weeks on new pieces and putting final touches on others. I'm in a good creative place right now and I want to keep making use of it.
Posted by Tim McFarlane at 10:31 AM No comments:

NEXUS/foundation for today's art has extended their call for artists to Sunday, March 15, 11:59pm

NEXUS is seeking experimental artists in ALL disciplines including but not limited to painting, drawing, printmaking, sculpture, installation, video, performance, electronics, digital media, audio, dance or curatorial practices to apply as members of our co-operative. NEXUS values artist members who are dynamic, willing to take risks, dedicated to their work and enjoy being part of a community of artists.

NEXUS members are given the opportunity to exhibit their work once every two years in solo exhibitions, participate in group exhibitions and curate large scale exhibitions. Our next review is March 15, 2009. Applications are due Sunday March 15, 11:59 PM

Questions? Send an email to: info@nexusphiladelphia.org

NEXUS is located in the Crane Arts Building at 1400 N. American St, Suite 102.
2 blocks north of Girard Ave, between 2nd and 3rd streets.

NEXUS is a registered non-profit organization, incorporated and qualified under Internal Revenue Service Code 501(c)(3), Our exhibitions are made possible through the kind generosity of State, City and Local foundations and by individuals such as yourself. You can help support our unique and valuable programming with a gift in any amount by clicking the link below. 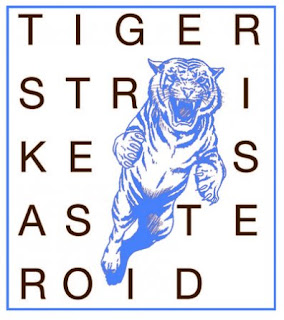 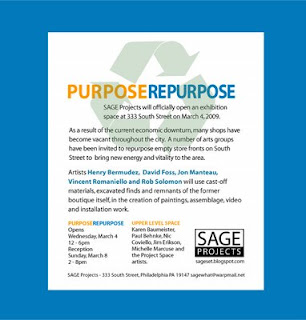 Philly's South Street is getting something of an art makeover, so to speak. There has been an arrangement made with building owners where arts groups can apply to use the empty spaces for projects, rent-free with only insurance and utility bills to foot until new tenants are found. I received an email recently from painter, Jim Erickson, announcing the upcoming shows that the group he is a member of, SAGE Projects, are having beginning this week


For the months of March and April, SAGE Projects will take over a recently vacated storefront space at 333 South Street. From the SAGE website:

SAGE will officially open a project space at 333 South Street. There will be a five person exhibition downstairs based on the theme of repurposing and recycling. Because of the dire economic situation a number of stores have become vacant on South Street in Philadelphia. A number of arts groups are taking empty storefronts and repurposing them to showcase their work and bring new energy to the area.

Artists Henry Bermudez, David Foss, Jon Manteau, Vincent Romaniello, and Rob Solomon will use cast-off materials, excavated finds and remnants of the former boutique itself, in the creation of paintings, assemblage, video and installation work. On the upper level these artists will join Karen Baumeister, Paul Behnke, Nic Coviello, Jim Erikson and Michelle Marcuse for a members group exhibition that will change over the March and April programs.


Also, there are a few more days to catch Martin Bromirski's show at UArts through March 6: