Art in a poorer world

I saw this discussion on Jen Bradford's studio*blog and thought I'd share it here. A lot of good points are brought up, many of which artists and gallerists have probably already dealt with in one way or another over the years. For artist, weathering hard times is a given, no matter what.

There's little here that's really new; economy shrinks, artists keep working, some galleries close, others change marketing plans, big blockbuster museum shows get scaled down or axed altogether, etc.. However, considering the economic crap swirl we're in, its still good to have some kind of dialog about how the recession is affecting the art world today.

(*note* This video is just over an hour long. Below are some shortcuts to various topics brought up)

Posted by Tim McFarlane at 8:37 AM No comments:

The interview is interspersed with images of Davis' paintings on found wood that are really striking to me. There are more images of them on her website, under the 'paintings (2008)' tab.

Also, Davis has a one person show at Larry Beck

er Contemporary Art that is closing soon.
Posted by Tim McFarlane at 10:30 PM No comments: 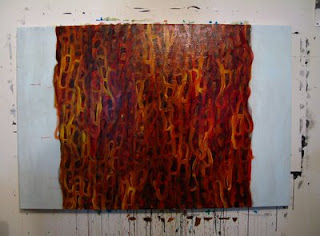 Stage 10: Working some yellow into the mix to lighten things up again. 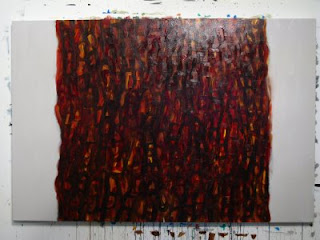 Stage 11: Added some deep reds. The blue on both sides of the middle mass needed to go. After a couple of mis-fires, the warm gray I wound up keeping felt right. 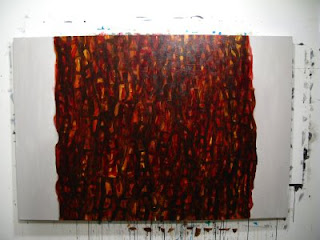 Stage 12: Only small changes along the edges were made here and that's it. For better or worse, this painting is finished. I've reached a point where doing anything more would bring diminishing returns. I'll let it sit for a bit, but I don't anticipate doing anything else to it.

During the course of working on this painting, there were things that I thought I'd try, but there's a point where a painting guides you on where it wants to go and I usually choose to follow that path to either completion of the piece or I give up in frustration and move on. Thankfully, this now feels complete.
Posted by Tim McFarlane at 11:33 PM 2 comments: 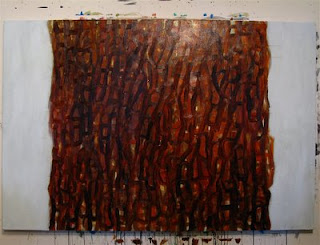 Stage 8: Working up a new layer of brown tones. Standing back to study what I'd done, I realized that the image is beginning to take on the look of a tree trunk, not a subject I had in mind for this painting. Though it might not occur to others, once the thought was out there, I couldn't help but want to diminish the association as much as possible. 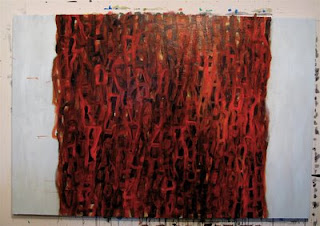 Stage 9: So, now I've chosen to work with another color option and some changes in brush work, but it's not quite where I want it yet.
Posted by Tim McFarlane at 11:11 PM 1 comment: 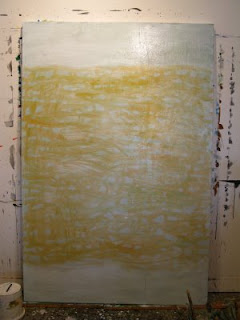 Stage 4: Wash of light blue over entire surface, part of which was wiped away to keep under lying yellowish field visible. 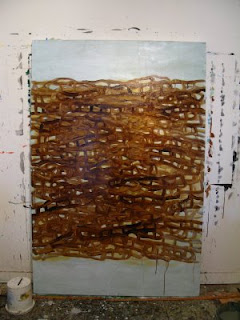 Stage 5: I went with a deep brown color for this next layer. 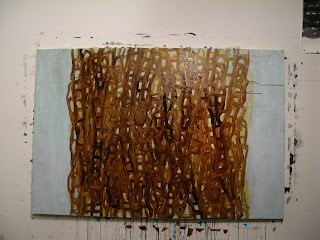 Stage 6: After a bit of consideration and getting tired of turning my head sideways, I turned the canvas to see how it looked as a horizontal. It seems to read better this way for me, so I'll most likely show it oriented this way. 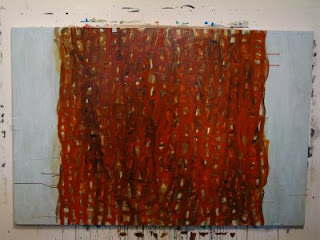 Stage 7: Thin wash of orange over the brown. More brown and maybe a couple of layers to come. At this point, I feel like I'll have this one resolved soon.
Posted by Tim McFarlane at 11:17 PM No comments: 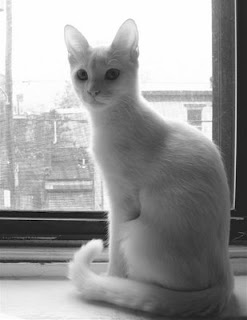 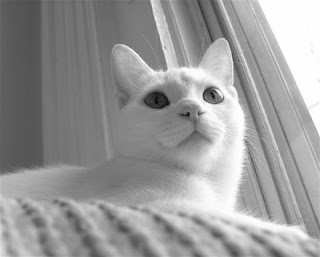 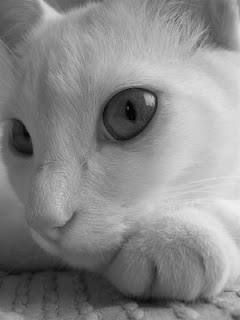 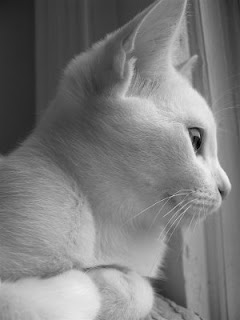 Didn't make it to the studio today, but I did spend some time taking photos.

Since it's Friday, and a gloomy gray one here in Philly, I thought I'd lighten the mood a little with some portraits of our cat, Banjo, that I took this morning. Enjoy!
Posted by Tim McFarlane at 7:16 PM 2 comments:

Maya Lin discusses her latest earthwork, Wave Field
(via C-Monster)
Posted by Tim McFarlane at 10:17 AM No comments: 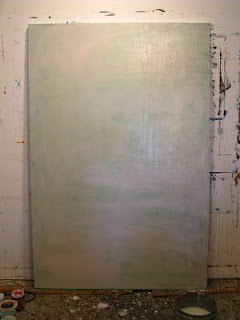 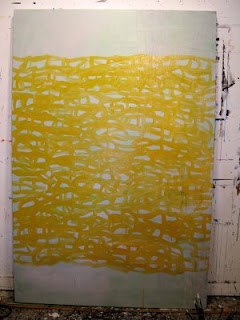 I needed to deal with the intense green and the remnants of the original painting, so I went with a thin layer of a light gray. Once that layer was dry, or close to it, I jumped into the beginnings of an image. I didn't have a ton of time before heading into work, so this is as far as I could go.

While waiting for that gray to dry, I turned my attention to a couple of new drawings and finishing up some prep work on a couple of small wood panels.

One thing I learned today is that I don't want to use heavy duty bristol (2 ply) for images that I use a lot of water with. When it dries, the edges curl up way too much. I turned the pieces over and wet the reverse sides which worked a bit, but I don't want to have to deal with that on a continuing basis, so I'll stick with watercolor paper or heavy printmaking paper.
Posted by Tim McFarlane at 10:51 PM No comments: 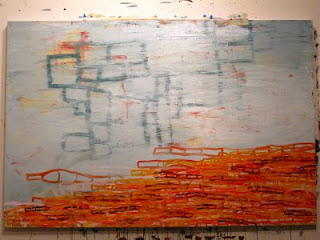 Above is Blue Rush (2006), a piece that never quite reached its potential. I thought it was finished at one point, but a nagging feeling kept tugging at me, pushing me to keep working on it, but I couldn't for some reason. I even talked with a couple of people about it, but still couldn't find a solution. I was stuck, so the best thing I could do at the time was to just put it away for a bit.

Well, it's been sitting for almost a year and-a-half with no changes made to it and I'm still not happy with it so I'm moving on. It's time to put this canvas to use for a greater good and recycle it for use with more current artistic concerns. With that in mind, I thought it might be interesting to document the changes the work will go through. I don't know how many stages I'll actually photograph because it's often difficult to stop and take a photo when you're in the 'zone' and pulling a piece together. No matter what happens, it'll happen naturally, so there might be 6 stages or there could be 20 or more, who knows what will happen.

With that said, below is the first stage of the change. I went up to the studio after work to prep a couple of wood panels and get started on this, as well. I flipped it horizontally and randomly chose this bright green just as a new ground to start from. 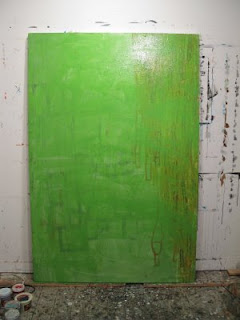 I've never been so happy and really proud to be an American than in this moment. It's a beginning, but what a moment it is! There's a ton of challenges ahead, but at least there's a sense of real hope for all of us.
Posted by Tim McFarlane at 2:01 AM 1 comment: