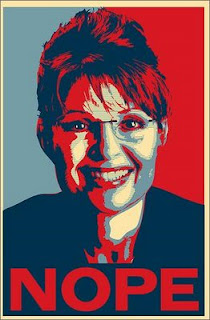 Palin has inspired some street art lately. I know, I know...it's like shooting fish in a barrel, but what fun!!
Posted by Tim McFarlane at 11:25 PM No comments: 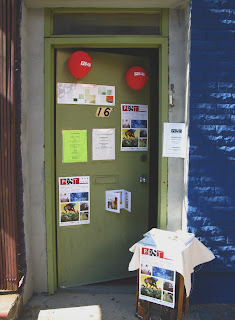 The open studio event went off without a hitch this weekend. This was the best event I've had in terms of visitor count since 2003, the first year I participated in P.O.S.T. Over the two days, 77 people showed up, and about 90% of those were not friends or acquaintances. I'm sure the great weather helped as did the increased visibility of P.O.S.T. in the media, most notably in the Philadelphia City Paper and through related exhibitions and events.

I met quite a few people and had some good conversations along the way. Of course, this being Philly, I wound up meeting a couple of people officially for the first time after years of seeing them around at art openings and on the street, nodding in acknowledgment but never actually knowing their names.

The only downside was that I was fighting off a cold during the entire two days. That was due mainly to the build up of stress beforehand. I didn't pick up my promotional materials until almost a week before and barely managed to get an email announcement out on Thursday. Thankfully, the cold never really caught on and I'm feeling a lot better after collapsing into bed last night. 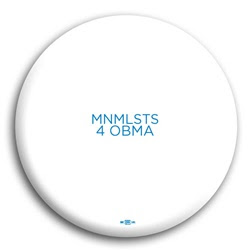 
...and then there's this from the Palin perspective which doesn't seem to get the point of Minimalism, or perhaps that's the point, after all...
Posted by Tim McFarlane at 5:13 PM 6 comments:

This weekend, I'll once again be participating in P.O.S.T. (Philadelphia Open Studio Tours)

Its been a while, but I'm back online and in the studio. The move went pretty well and we're settling in, slowly getting rid of boxes.

In the studio, I've begun taking up where I left off in August and moving ahead with some new works. I'll be hunkering down in the studio this winter in preparation for a show of works on paper at Philadelphia International Airport beginning in March '09 and my next solo exhibition at the Bridgette Mayer Gallery in April '09.
Posted by Tim McFarlane at 10:00 PM No comments: