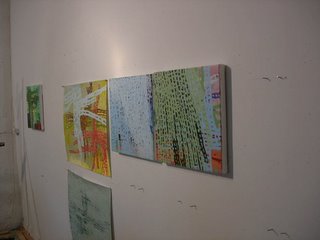 I have some new pics uploaded that were taken by Chris Ashley when he visited earlier in the month. There are more from this set here
Posted by Tim McFarlane at 9:20 PM No comments:

There's an interesting article about my work and that of my friend and fellow painter, Anne Seidman, on Roberta Fallon and Libby Rosof's Artblog. It was posted on September 29th, a few days after my solo exhibition at the Bridgette Mayer Gallery had closed.
Posted by Tim McFarlane at 2:30 PM No comments:

It's 5:25am and I'm up. I've been awake since a little after 4am and got to bed around 12am. My alarm is set to go off in another hour and-a-half. Later in the morning, I'm heading up to New York for the AAF Contemporary Art Fair.

This is the last of a couple of months of big art events I've taken part in. In September, there was my solo show at Bridgette Mayer. Then, I had work included in The Urban Canvas at Gallery Siano. I helped jury an exhibition at the Bryn Mawr Rehab Hospital. After that, I did the open studio weekend and now, there's the New York fair. It's been really busy, but I'm not complainig. A lot of really good things have come out of it all. For example, I got to meet a few artists I hadn't met in real life before, like Chris Ashley.

Chris came to Philly from California for the show and we had a good talk at my studio while he was here. I don't have many studio visits with other artists. I should do it more, but haven't. Mainly for lack of time or schedule conflicts. Anyway, I enjoyed talking with him about my work and his. We exchanged stories about what it's been like for us as artists and how that has impacted how we live our lives. It's also very interesting to see how your ideas are filtered through your peer's eyes and minds.

It's hard to put your work out in the world for the general public to look at and critique. Your creative peers are another story altogether. It's much easier to talk to another artist about what your ideas because there's a shared language and understanding of what you are doing. There's a distinct level of understanding and dialogue that's possible with another artist that you might not have with someone who isn't directly involved with creative pursuits. Discussing my ideas with someone else also often leads me to see my work from an angle I previously might not have been privy to.

So, now, there's the New York art fair. I'm pretty excited to have the chance for my work to be seen in New York so soon after the show at the Broadway Gallery this spring, as well as after having my solo show. It'll be interesting to get a 'behind the scenes' look at what these things are like.

I'm tired. Not just from lack of sleep tonight/this morning, but from the whirl of activity that's taken place over the past, well, almost year, now. I haven't been in the studio since my show went up and have been anxious about it. I recognize the need for physical and mental rest, but it's been difficult to relax and not do something in the studio. My headspace has been taken up by so much stuff outside of making art, that I haven't had the chance to begin the process of really recharging my creative batteries. There are a lot of ideas floating around in my head as usual, but I can't quite act on them yet. Perhaps in the next week or so, after the fair is over, I'll have some clear mental space to begin painting again.
Posted by Tim McFarlane at 5:25 AM No comments:

I managed to get the studio set up for Open Studios quicker than I thought. It helps that this isn't the first time I'm doing it, so I was much better prepared. Waiting until the day before to set everything up and run around buying essentials and getting other tasks done wasn't the smartest idea, but I made the most of it. I even made it out to catch two openings tonight. I stopped by Fleisher Art Memorial for the 2nd Challenge Exhibition of the seaon.

I only got to check out Mauro Zamora's and Jon Manteau's paintings. Both are very strong painters but with different sensibilities. Mauro's paintings are more graphically inspired, while Manteau's are expressive in a much more visceral way. I'll have to got back to check out Penelope Rakov's sculpture work. I was in a hurry because I had to get to 40th and Chestnut to catch my friend, Delia King's opening.

Delia was showing some new pieces which are patterned-based and most of them weren't explicitly figurative, like much of her previous work. She's still using her reverse glass painting technique, only with patterns which resemble fabric or wallpaper samples. Instead of putting all of the patterns together on one piece of glass, she's opted for multiple panes, each with it's own pattern. This idea works for me because there's another layer of movement, the viewer's, which changes how the work is experinced depending the vantage point of the viewer. I think the work is pretty successful and was pleasently surprised when I saw the new paintings. It's always good to see fellow artists taking risks in thier work and maintaining a fresh feeling in it.
Posted by Tim McFarlane at 11:38 PM No comments:

lagging but catching up

The past few weeks have been really busy and, consequently, I also haven't been keeping up with posting here. I'm going to try and get caught up soon.

In the meantime, there's the second week of the Philadelphia Open Studio Tours happening this weekend. This is the third year that I've participated and also the first time that I'm not really looking forward to doing it. I like opening my studio and have people come in and experience a working studio, but the excitement I had the first couple of times isn't quite there this time. I think this bit of reality began last year when attendance was way down over both days from the year before. Part of that was due to bad weather on Saturday and on Sunday, there were a couple of other big events going on in the city, which left fewer people walking around Old City, where my studio is.

My expectations about attendance had a lot to do with it, also. This year, I'm not doing as much preparation as I've done in the past. I'll still have snacks and drinks, only less of both. I'm not worried about painting the walls, although I may fill in some of the nail holes. I'm also concerned about being basically the only artist in the area participating. There are a couple of other people kind of close, but they are still blocks away.

My feeling is, unless people are planning to be in the Old City area, I'm not going to get many visitors. There just isn't a cluster of other working artists in Old City any more, and I think the interest in going over there is going to be pretty low. Then, people just walking by generally just won't come in. I think a lot of them look at the poster, balloons and other materials I've had on the outside door and think they have to pay to get in or something. Some people are simply intimidated by art and artists and feel they will be intruding, even though the public is being invited to come in.

Also, more people seem to know about the artist building at915 Spring Garden Street than any other artist space around. I've done a lot of promotion on the 'net and in real life by talking to people and handing out brochures. As anyone who has attempted to promote anything knows, you can shout from the rooftops and the public will still not give it a second thought. Well, POST is becoming more well-known, and the studio tours are getting more media exposure, so the only thing to do is to see what happens.
Posted by Tim McFarlane at 9:17 AM No comments: